Trying to Get a Triumph Spitfire to Start

I had 11th hour apprehension about purchasing the car. The more research I did, the more I determined that the intake manifold didn't look right. The short of it is that it is a Mk 1 engine (and an early one at that, FC 3997 HE) installed in a Mk 2 car. However, for whatever reason, the PPO put in the Mk 2 intake and exhaust manifolds. This results in, essentially, no hot water to the heater coil.
However, with the exception of this and a different camshaft, there is little differentiating the engines. Oh, and 63 BHP instead of 67 BHP...yeah, not going to matter much, I don't think.

So, in the end, I bought it at the agreed on price and, a short U Haul trip later, she was in my drive way, all nice a pretty. That was yesterday, 8/23.

Today, 8/24, I got the car cleaned out and vacuumed. Found some more rust than I had originally hoped. The front sill on the passenger side may be an issue, but it's from the interior. The underside and outside still seem to be solid...however, that's an odd place to rust FROM...so, further investigation will be required. The battery pan has been fiberglassed and the drivers foot area has been replaced with a piece of pop-riveted metal. There are some holes in the floorboards, but nothing extreme and it has all been rust treated. So, I think it will be more than solid enough to drive, but definitely something to look at fixing earlier rather than later.

Woke up too early and I was done with that cleaning and inspection by about 8:00 am (too damn excited). Then, the rest of the day was taken up with trying to get her to run.

First, the old battery from the PO wouldn't hold a charge (not surprising...hoped to get lucky) so a quick trip to AutoZone got me the cheapest battery I could get. Hooked that up and pressed the ever-so-convenient button on the starter solenoid and she immediately turned over. Sweet.

However, when turning her over, I noticed some light smoke coming from the area of the head gasket at the rear. Odd, since it wasn't running, it couldn't be oil smoke or anything like that. More investigation led me to find that the ground return path from the block to the chassis was going via the accelerator bar (that light brown rod that comes up, traces along the back of the head, and back down in the picutre below on left). If I lifted the bar off the block...no roundy-roundy. So, I located and removed the block grounding strap, cleaned it up real well, re-attached, verified resistances, and it worked like a charm regardless of the accelerator linkage location. That, of course, brings into question the proper mounting of the accelerator linkage...should it really be touching the block?....for another day! 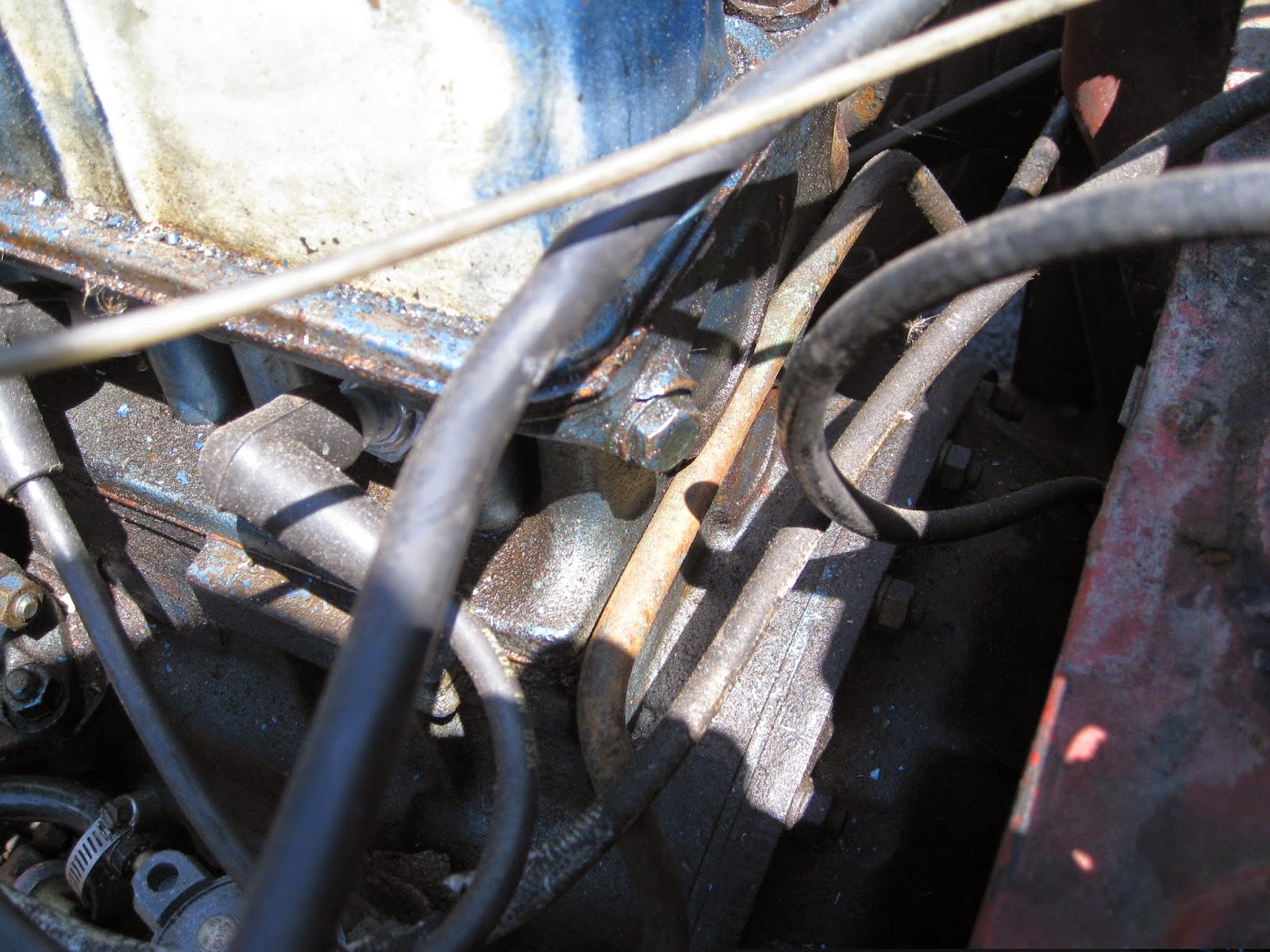 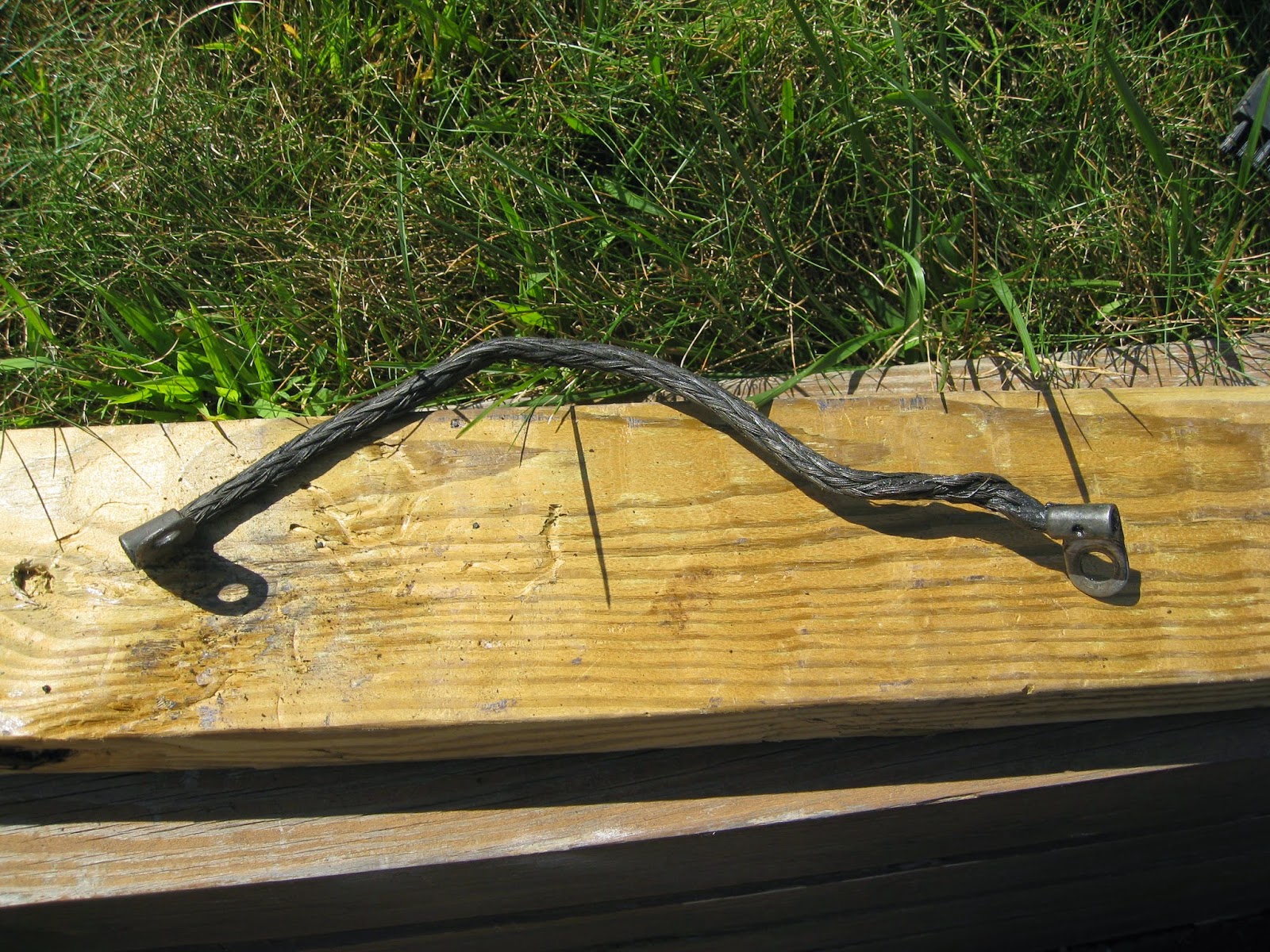 Then, a quick reference to the handy-dandy Triumph Workshop Manual that the PO was so gracious as to provide and I energized the ignition system using jumpers. 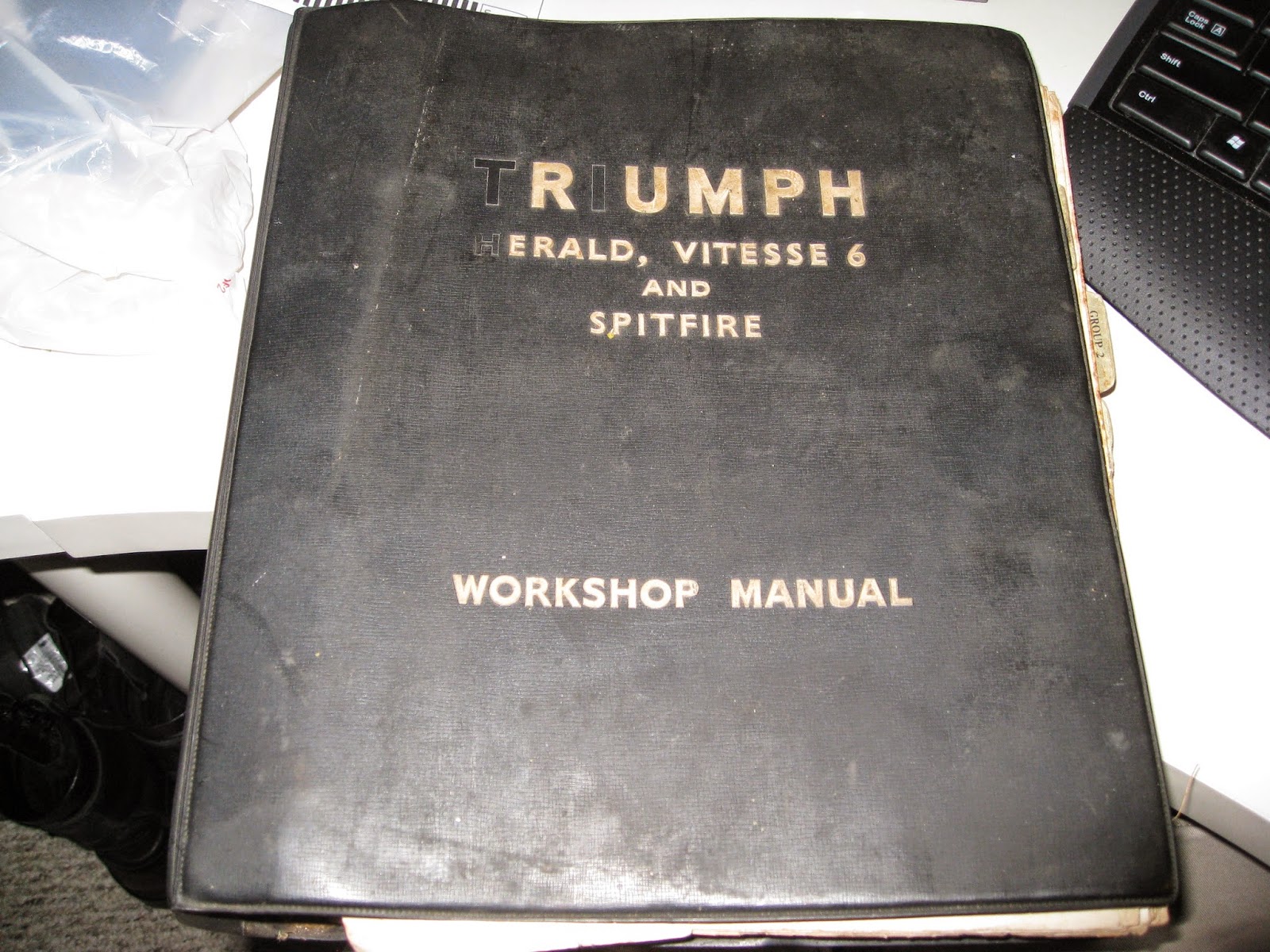 Unfortunately, the PO is unable to locate the keys...hopefully he finds them so I can use the door locks, but a new tumbler, with keys, is only about $15 from Victoria British. So, hotwiring the ignition led me to verify that the tail lights, wipers, the oil light, indicating low oil pressure, on the speedo all work.  The horn...well, the horn clicks... So, electrical systems seems, at least, functional.
Pulled a spark plug, put my finger over the hole and had it blown back...a good qualitative if not quantitative test for compression. Plug looked good. Put it into the plug wire, held the plug to the block, turned her over and had a strong spark.

Holy Cow, I love it when a plan comes together. Got spark, got rotation...just need gas...and maybe some starter fluid...it's been at least a year...I think more, since she's been running.

So, I undid the float pot lids on the carbs and filed them about half-way with gas. I noticed, however, that the piston on the front carb stuck quite a bit. The aft one worked just fine, however. I have about ZERO experience with SU carbs, let alone twin ones, so I just left it. But, I cranked her over several times, using and not using starting fluid. Lots of catches, some pretty good backfires and some responses back through the carb body (but only the aft one).  However, except for one time where she ran for about 2 seconds, she wouldn't stay running.

Then, the engine characteristics changed...either out of spark or out of gas.  Sure enough, the rear float chamber was empty, but the front one was still about half-way.  So, the forward carb is, right now, not working.  Could be as simple as cleaning it up a bit or who knows. I'll do some disassembly and inspection and hopefully get the piston moving freely...probably just some old gas "gum". Then, I'll roll the dice again.

Unfortunately, due to prior commitments, I have limited time to work on her tomorrow.  Maybe I'll get lucky, do a quick cleaning of the carbs, and get her to run for more than a second. If so, then it's on to a rebuild of both master cylinders (and maybe clutch slave...haven't looked yet) and both front brake calipers.  Then, overall checks of clutch and brake operation and I think she may be ready for a trip or two around the block...as long as I can get the tires to hold air.
Posted by Chris at 10:52 PM