As you may remember, I left it last time with the passenger's side lower wishbone not wanting to go into it's chassis mounting holes. I conquered this problem and moved smartly along with more assembly. As a matter of fact, I'm to the point now where I need to get the chassis down off the sawhorses and closer to the floor (within floor jack range) because it's rapidly becoming too heavy to lift by hand. Onward!

Here's what I was faced with last time.


Following a rather lengthy and detailed discussion in my favorite forum, it seems the two-piece design of the polyurethane bushings that I am using don't allow for an offset like the original one-piece bushing design does. The following two pictures show that.

The fact that the polyurethane bushings were essentially forcing the wishbone to be centered about itself meant that it wasn't being centered about the frame holes, hence the offset. For the passenger's side, I removed the wishbone from both mounting plates and set them into the frame.

It's obvious that the alignment wasn't perfect. However, I didn't feel that it was skewed enough to do any modifications to the bushings (e.g., polyurethane removal) so I used my rubber mallet to drive them home, aligned the holes with a drift punch, and got it all bolted in. Oh, and I did remember the shims that go between the mounting plates and the frame. I bolted it all back together exactly how it came apart.


Following that ordeal, it was a simple matter to mount the upper wishbone mounts to the suspension turrets. Of note, neither the upper or lower wishbone bolts get tightened down until the suspension is fully loaded. This is called out in the workshop manual. This fact went in my log book as it will probably be one of the last steps I do after engine AND body installation.


The damper and spring were next. This was a bit of a pain since the suspension was fully relaxed but the spring was under tension around the shock. Hard to explain, but I don't think the workshop manual expects you to have everything taken apart. Without some support under the wishbone (like the tire on the ground), everything is somewhat crooked. But, since there isn't any weight to the chassis yet, I couldn't "support" the suspension with my jack since it would just lift the whole thing. It took some work, but it finally got it.


The driver's side was a repeat of the passenger's side except I was able to put one of the studs for the lower wishbone mounting brackets in its hole, then push on the assembly with my hip and fit the other into its hole. It all went in rather easily using this method and I probably could have done it on the passenger's side as well as I did not damage any threads (my biggest concern).

I also tried to make the damper/spring assembly installation a bit easier. To do this, I unbolted the upper wishbone (two sides) from the upper ball joint.

This allowed me to drop the lower wishbone and vertical link down and out of the way, so to speak. I put the damper/spring assembly in, got the top three nuts started, then pushed the lower wishbone and vertical link back into the damper lower attachment. I got that bolt through and then worked everything back together, tightening everything a bit at a time. A bit hard to explain and I didn't take any better pictures of it, but hopefully you understand.


After that, I was essentially out of time for that day but I tied up a few loose ends by getting the steering rack placed (not installed, really) and also the rear spring set.

On my next visit I got the rest of the front suspension assembly installed as well as starting the rear suspension installation.

For the front, I needed to get the hubs and rotors on as well as the brake calipers. I had all the hardware I needed. When I did the front hub inspection and cleaning a LONG time ago, I determined that everything looked good and I didn't need new bearings or races. I did, however, get new felt seals and hub washers.

There's been a lot of discussion on new felt seals. They are essentially a two piece assembly. One piece is the metal retaining ring that is interference-fit into the hub. The other piece is the felt seal that is lightly attached (with a thin bit of glue, I suppose) to the metal ring.

From what I've read, many of the currently available metal retaining rings are too thick and do not fit into the hub. Some of the forum posts also mention the seals themselves are very thick. I compared my new seals that I got from SpitBits to what I removed from the car. Circumstantial evidence both on the car and in the workshop manual (pen marks circling part numbers) show that these have been replaced at some point. However, it looked like the PO had to deal with the thicker retaining rings while SpitBits provided me the more correct, thinner rings.


My new seals simply tapped into the hubs with a rubber mallet. One side was easier than the other, but neither was difficult nor did either seem like it was too loose or too tight. I guess it all depends on where the "too thick" part is. If the outer rim is too thick to the outside, it would be too big for the hub. If it's too big for the inside (preferable, I would assume) it would be too small for the felt seal. In any case, it worked for me!


One other thing I read, though not as frequently, was that some resources, including older workshop manuals, show the felt seal being installed backwards. Note the picture above shows the felt seal on the BACK side of the hub. Properly, the felt seal should come in contact with the face of the vertical link, NOT that face of the hub. It seems pretty obvious to me that that is the way it should be, but there you go.


Of note, I also replaced the front hub washers. I assume it was improper installation, but for whatever reason, the washers were in horrible shape, especially the passenger's side. These were replaced as a matter of course.


After that, it was a simple matter of putting on the brake calipers (with the new internal o-ring seals that I pray do not leak!).

The passenger's side was essentially the same procedure, just the opposite. I did not encounter any surprises or problems.

After that, I moved to the back. I installed the emergency brake cable. This was a bit tricky and I kick myself because I didn't take adequate pictures. There's a trick to this that I discovered in this post. I truly apologize for not taking any pictures but I deformed the cable a bit doing it the first time and didn't want to take the chance of deforming it to the point I was afraid for it's integrity by pulling it back out and taking more pics. Maybe I will, though, who knows?

After that, I pulled the rear spring back off and pulled the studs. As these studs penetrate into an "open" void where oil will be, I wanted to use some thread sealant when I decided it was time to actually put them on for good.


I installed the studs with the thread sealant, put the rear spring back in and torqued the nyloc nuts as specified.

I also got the u-joints between the differential and the rear axles installed. As I chronicled previously (here, here and maybe more), I originally went with grease-able u-joints. However, when I ran into issues with these, and since I was placing an order anyway, I went with Hardy Spicer ones from SpitBits. This was a bit of an impulse/name-brand buy, I must admit. The ones I got from Rimmer's were probably just fine. 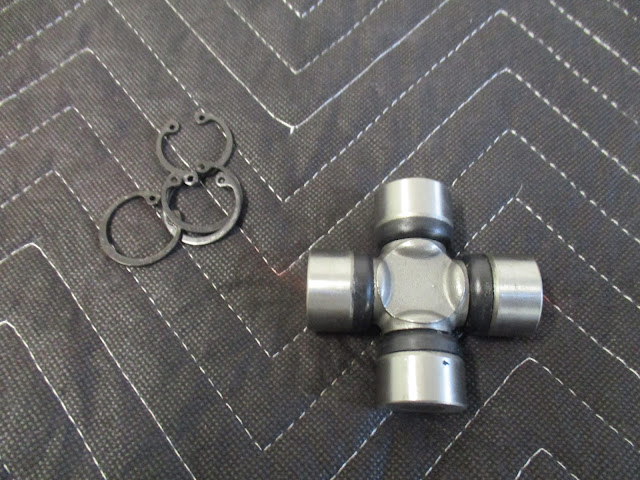 The final thing I did for the night was figure out that I made a pretty bad rookie move in not providing more attention to protecting the threads during chassis painting. Several of the body mounting points...all, actually...bolt directly into the frame. Unfortunately, I didn't have the forethought to protect these threads from the POR-15 (and red base coats) to prevent clogging them up. I figured my thread cleaner would make short work of that oversight, but it hasn't. So, before I got too far ahead of myself and damaged some threads, I stopped. Though I've cleaned a few, most points where the body will bolt to the chassis, as it is now, will not accept that bolt. I'm sure I'll come through this, even if it means using a HeliCoil kit, but I should have known better!