I've never taken a distributor apart before, so it was going to be an adventure! Like with other posts, I'll be referring to some pieces and will provide the corresponding number from the picture below. The picture isn't of the exact same distributor as I have (this is the D202 from a Vitesse instead of the D200 from the Spitfire), but it's close enough for the discussion. 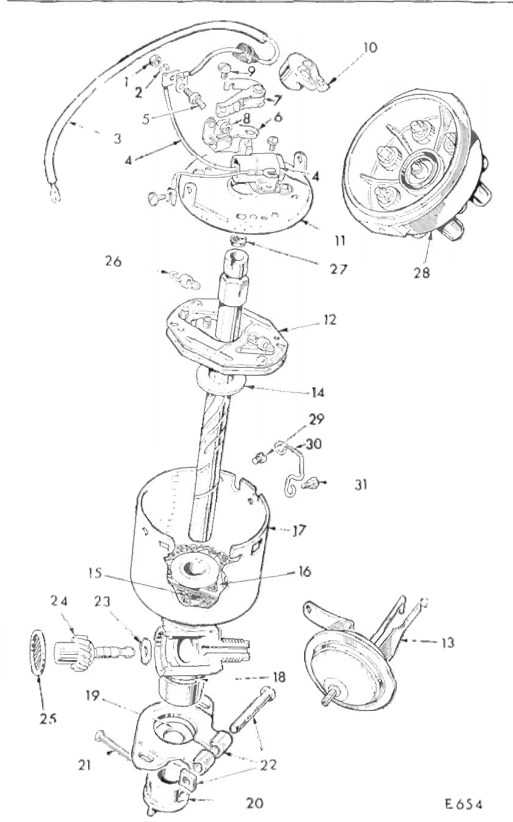 I have two distributors. The one that was on the car and a spare. The spare does not have the tachometer gear (24) but is complete in every other way. I figured I'd start with this one and learn any lessons since I wasn't planning on using it. The pictures are a mashup of the two distributors so you may notice some inconsistencies.

After removing all of the "stuff" (condenser, points, rotor, etc) three external screws, two of which are numbered above (29, 30), release the contact base plate (11) which then can be lifted out of the distributor body. The vacuum advance unit (13) also came out with these two screws.


The contact base plate is two separate parts with a piece of felt in between to retain oil for lubrication. I circlip and stacked washer/clip assembly sandwich them together.


One the contact base plate is removed, the centrifugal weights and springs are revealed. I had no desire to take these apart as they operated freely and I didn't want to risk damage.


Separating the base and contact plate reveals the felt pad that accepts lubricating oil for the distributor. I replaced this.

Once the contact base plate was out, I removed the distributor pedestal with a gear puller as it wouldn't come off by hand.


With the pedestal came the clamp plate (22). And that was as taken apart as it was going to get. So, I cleaned it all up and shot it with the two coats of primer and two coats of low gloss black, per the normal plan.

I got everything put back together referring to pictures I took during disassembly (not shown here) and with the workshop manual. I will need to replace the low tension (LT) wire as its insulation was cracked in several places and previous repairs were not well done.


The LT wire runs through a rubber grommet on its way out of the distributor. Both of them that I have are quite hard and brittle, so I'm going to soften them up. I still have some research to do on the best way, but I've seen a lot on rubbing alcohol and wintergreen oil. Whatever works, I guess.


And that was it. All back together, nice and pretty.


I did test the vacuum advance mechanism as well to ensure that the rubber diaphragm wasn't torn or damaged. I used a highly technical method that you can see in the slightly blurry video below.