As I mentioned in previous posts, I have several hours of video that I took while rebuilding the engine. Things like setting the camshaft position and static timing were better covered in those. But, I still have yet to edit and make them presentable. Therefore, there is some important information in the engine rebuild process that I have skipped. In hindsight, it was a mistake to do the video in place of photographs but by the time I figured that out, I had moved past important parts. I will eventually go back and capture that stuff. I will say that there is nothing that I would bring that isn't clearly covered in the workshop manual and that was my main reference.

Moving on...Due to damage, I switched from my original exhaust manifold to a stainless one from Rimmer's. Unfortunately, the fit of it wasn't that great and I had to apply some brute force to get it installed. It still contacts the block slightly, but it looks great!


I took measurements of the original versus the stainless and discovered that at the final coupling from 2 to 1 pipe, the stainless one was off by about 1/2". Therefore, when it made the turn toward the back of the car, it hit the clutch housing since it didn't "drop" as much. A bit of bending with it mounted to the motor, though, and I got it sorted.

Along with replacing the carburetor's (may be spelled with one "r" or two) throttle shafts and disks (video), I did a complete rebuild including the jet bearings, front and back float bowl adaptors (which are color coded for your pleasure but get brittle easily), float chamber service kit, and the main jets, needles and all of the software that came in a overhaul kit.

You may remember if you've been around a while or gone through old posts that I did a carburetor rebuild shortly after getting the car. However, I did some of that incorrectly so I wanted to do it again. I saved everything as I have since acquired another set of carburetors that I will eventually clean up and rebuild as well.

Another thing I needed to do was bend the fuel pipe that went from the outlet of the fuel pump, around the distributor, across the front of the motor and to a fuel hose that transitioned to the front carburetor. I used a wire clothes hanger as a template and got to work.


I guess I was spoiled by the ease with which I was able to do the brake lines and the rest of the fuel lines because this one totally kicked my ass. I destroyed one piece of copper pipe and purchased more, but was eventually able to get it done right. As a matter of fact, I would put my second attempt against a factory job!

I also needed to run the vacuum pipe from the front carburetor to the distributor to provide for the vacuum advance, the vacuum of which is provided by the intake action of the motor. The factory used a very small diameter metal tube. Unfortunately, years of bending mine had cracked it in a few spots and I was forced to use a combination of rubber and solid tubing, making this a simple task.

I temporarily routed the exhaust piping and the main silencer so that I wouldn't go deaf when I ran the motor. Some of the exhaust system attaches to the body, so I didn't want to permanently mount anything to the chassis until they were reunited. I also "jumpered" the cooling circuit to connect the head cooling outlet and the coolant return pipe since there was no heater or heater valve.

With that, I was essentially done! I still had the electrical to do so that the motor would turn over (starter circuit) and start (ignition circuit), but I had already made, bought or had the wiring I needed to do that and knew how it was going to go.

The finished product! Please forgive the appearance of the gearbox. I rebuilt it about two years ago and it has been sitting under the garage stairs for almost a year! 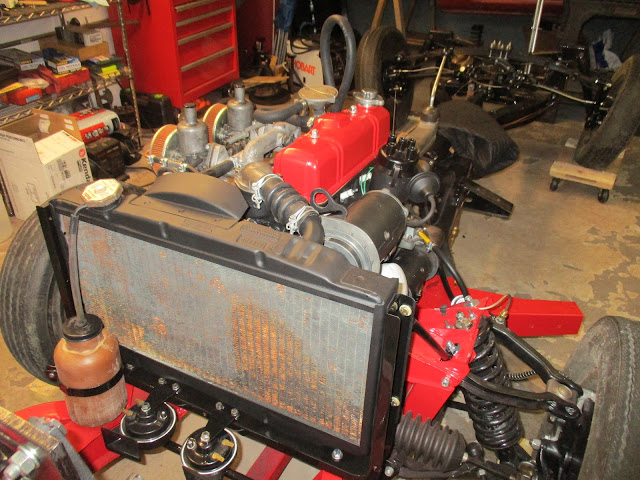 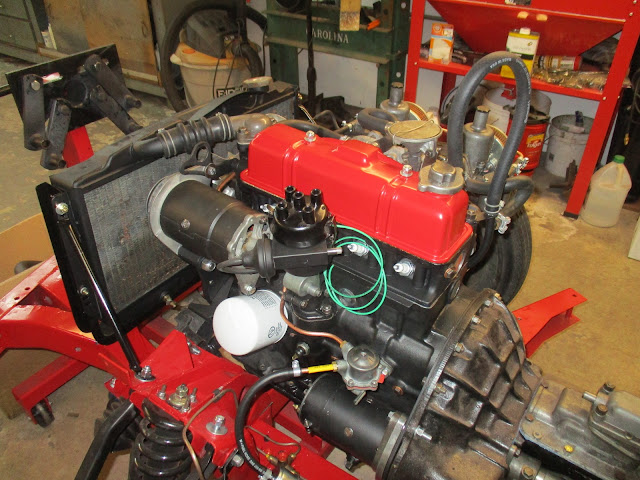 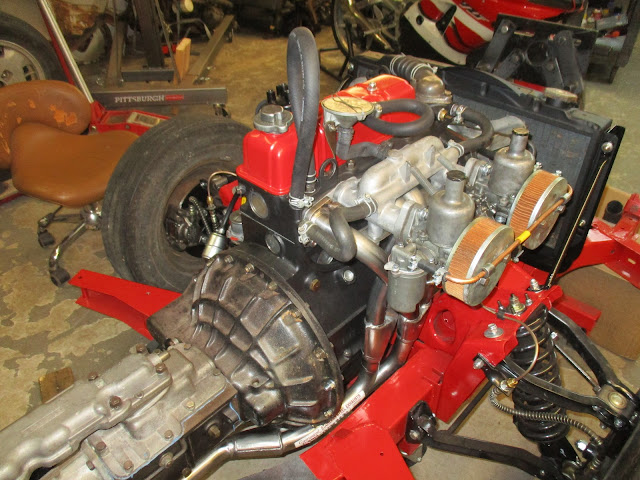 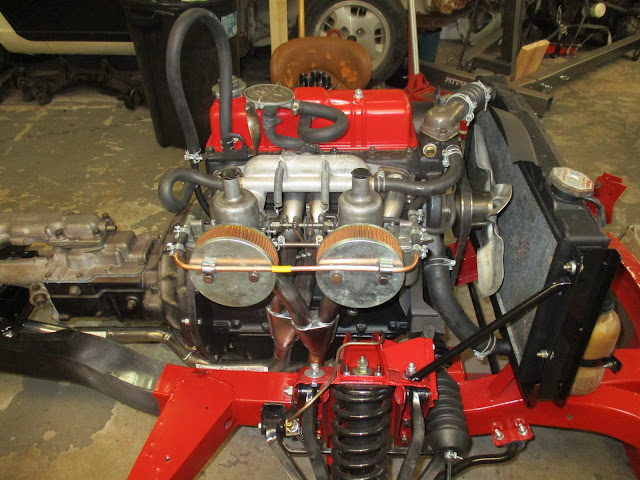 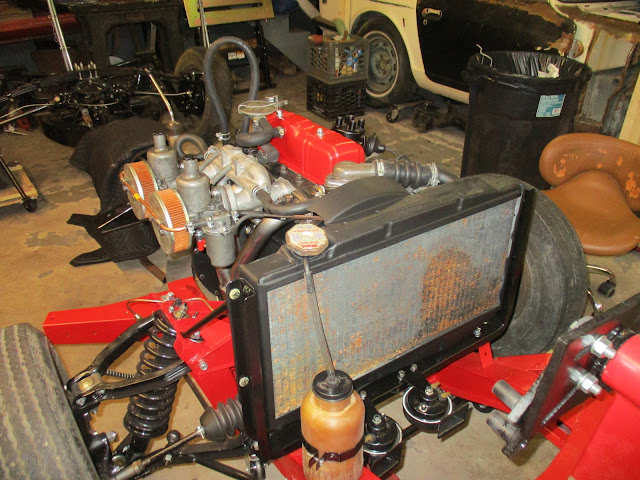 I came back within the next few days for first start and wired up the starting and ignition circuits. I also pulled the distributor and primed the oil system using a cordless drill and a modified bolt to turn the oil pump. I had an 8" (length) 3/8" bolt that I cut the head off and notched so that it would mate with the oil pump drive gear.


I then connected my Harbor Freight Engine Oil Pressure Test Kit that I picked up for about $20 (with a 20%-off coupon!) into the bottom of the distributor housing where the oil pressure sender is normally installed.


To be honest, I ran the drill for about 30 seconds and started to get nervous when I wasn't feeling any resistance or development of pressure. Of course, like any pump with a specific suction and discharge, direction of pump rotation is important. So, I stayed calm and reversed the drill direction. Within about 15 seconds the drill started to labor a bit and shortly after that, the oil pressure tester started to develop pressure. Oil also was visible up through the distributor bushing, so that was another positive sign.

Within about 30 seconds of rotation, I was developing about 65 psi of oil pressure. I don't know what the equivalent engine RPM to drill speed was, but I was very happy with that amount of pressure! I ran it for about another 2 minutes just to allow full flow and venting of the oil passages.


Once that was done, I put the distributor all back and and did a quick static timing and points gap check to make sure I put it back in properly. One nice thing about directly driving the oil pump is that you don't lose top dead center of the motor, so static timing was easy.

Here's the beginning to end video. It runs about 8 mins or so.

Once that was all done (I did run it in for about 30 minutes which allowed me to figure out some more leaks (no oil ones...yet!) and that the generator bearing needed some help) I swapped the chassis and motor for the body. Now the fun begins!