I didn't wait as long between my visit and my write-up this time posts so I didn't forget anything. I've got a relatively quick video of what I did on Sunday. In short, with the exception of the passenger's side door, I'm pretty happy with all of my gaps, or know what I need to do to get them where I want them. I think I'll be okay on that door, too. Please note that some of my pics below are not really time sensitive, so they may have been taken before or after what I'm writing, in case you notice some inconsistencies.


I decided to revisit the bonnet pivot tubes and the transverse support tube. I still wasn't convinced that these were properly set. I had measured how far the pivot tubes stuck out from the bonnet on the black car and they were both about 2.5". Dorothy's were shy of that, with the passenger's side was being worst. Given how far back I had to push the hinge, this made sense. I loosened it and pulled it as far forward as I could, but I ended up only get about another tenth of an inch or so. Better than nothing.

I also remounted the transverse support tube. I used two wood shims to spread the passenger's side wing out from the tube and then tightened it down. It worked, surprisingly. I really didn't need to do any adjustments to the driver's side in this area. After these adjustments, the wings sat real nice with the sill. This was also without having to pull down on the tube, which made me feel better. I'm not so sure now that I understand what this adjustment point was designed to accomplish (more on this in a  bit). 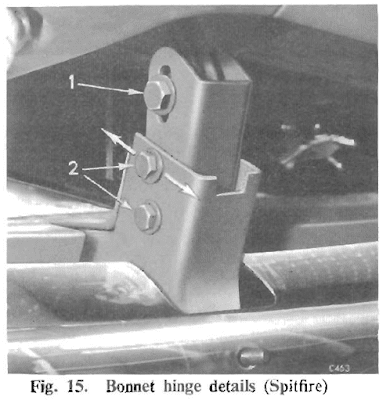 You can compensate for this by then raising or lowering the bonnet at the hinge (item #1 above). But, again, being at the bottom front of the bonnet, it also introduces a tilt. So, it's a fight between the fore to aft movement and the up and down movement to get all of those gaps correct. And, yes, if you sneeze, they all go to shit!

Another area that requires attention is the center of the bonnet at the sail plate. I think this area may be impacted by the flex of the transverse tube as well as the washer stackup in this area (or lack thereof). I did vary the number of washers, but I didn't really notice a difference. Like I said above, I'm not sure that I fully understand this adjustment.

The rear vertical height, towards the outer edges, is set by the bonnet cones. These screw in and out and also will slide side to side a bit, but there isn't really much adjustment to them. But, as with everything else, they impact gaps elsewhere, specifically between the rear of the bonnet and the horizontal of the sill, along with the top of the bonnet and the front sail plate.

Confused yet!?!? Pain in the ass...but fun at the same time.

With the end in sight on the bonnet, I moved on to the doors. As I previously discussed, I drilled out the holes in the driver's side door hinges where they mount to the A post. This gave me some more wiggle room and I was able to adjust the door where I think it's good enough. I have a mild concern for some rubbing near the bottom forward edge, but I think I can get that out of there. Otherwise, I may have to do something because I'm afraid a good bump will cause the paint to chip.

I moved on to the passenger's side next and it kicked my butt for a while. I never got it set right, but I had done it in the past when I was welding the sill in, so I think that I just need to find the sweet spot. Right now it's twisted so it sits proud of the sill. This results in a gap between the inside of the door and the rubber seal in that area. I don't have this problem on the driver's side. Initially, like with the bonnet, I thought I might have damaged the door, causing it to flare out. But, if that was the case, I wouldn't expect to see the gap on the inside. Next visit.

One other thing about the doors is the difference in contour between the top trailing edge on the door as compared to that area of the B post. I didn't put my contour gauge on it, but I don't think the curves are the same. You can kind of see it on the picture above but I think it's more obvious on the picture below. Above the level of the door handle, the B post rises more vertically than the door, which seems to cut in a bit before moving back vertical. I'm sure I could fix this by welding in a metal rod or some body filler or something, but I don't think so. I believe the car was built like this and it's not an adjustment problem, so in my mind there's nothing for me to fix.


That was about it. Gaps are not fun, but I'm gaining some experience so it's making sense to me what I need to adjust depending on the gap I'm looking at. Eventually, I'll get them all set where I want them. The only thing that concerns me is the driver's side door because of the self-induced (maybe) droop in the A post. That one may still be tricky, but I'm rolling with it for now.

Minutes before I left for the day, I threw the windscreen frame on there. Though I forgot the front valance, she's actually starting to look like a real car again. Of course, I've got to take it all apart, but better messing up and learning now then when I've got nice shiny paint on there.

Which reminds me, if anyone has some tips on how to mark everything so I can put it all back in the right spot (or close to it) when I get it painted, I'm all ears. Right now I'm thinking scribe marks around the hinges and such so that the metal is gouged a bit and the paint doesn't fill it in. I've heard about drilling small holes, too, but this doesn't make sense to me, so maybe I'm not understanding this method.

On a final note, I'd like to thanks several of you who have reached out, both here and on YouTube, to provide help and pictures and the like as I come through this part of my restoration. Simply amazing support and I'm sure it's going much better because of it. So, thanks so much!