Even though it's a holiday, I decided it was a good day to get some work done before the festivities kick off. So, with the help of my 8-year old, I was able to get the front of the frame stripped of the suspension and other little bits.

I was not expecting to see shims on the frame mounting points. It makes sense, of course, to help square everything up; I just didn't expect them (though, duh, if I had actually studied the Canley's drawing first, it would have been obvious). Interestingly, they must have gotten the driver's side of the car more "true" than the passengers because there was only one shim on the driver's side while there were six on the passenger's side.

Of course, I'm not sure it will matter because, unless I replace the turrets on each sub-assembly, I won't be using them as a whole due to the modifications the PO made (you can see some of that in the first picture above). I found them on Canleys for only $60 each (seems cheap to me). But, with two other good ones (at least as far as I can tell) on my red car, not sure I will be going that route.

I was unable to get the tie rods out of the steering arms, however. So, I cheated a bit and removed the steering arms from the sub-assemblies instead. I will need to get them out at some point, of course and hopefully I didn't make it harder by losing the weight of the frame to help bang them out. I don't care about the tie rods as I have new ones, but I would like to get everything apart. Future me. 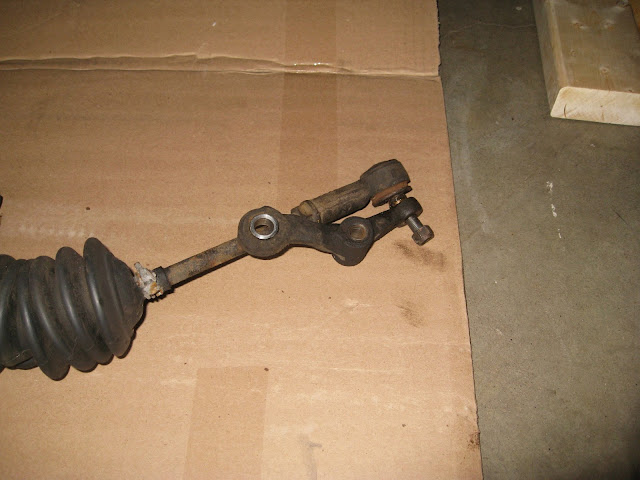 That was it for today. Supposed to be cold tomorrow (38F or so) but I plan on bundling up and getting the rear end stripped. Happy Thanksgiving, everyone. Hopefully you are able to spend it with the ones that mean the most to you. Please say a special thanks for those serving our country (I missed my fair share of Thanksgivings) and keep them in your thoughts as you celebrate.
Posted by Chris at 3:36 PM