I knew that I would probably have to break down eventually and get one of these and I was correct. Getting a hammer into the nose of the bonnet was nearly impossible and using a slapping spoon and dolly wasn't really effective. A stud welder was just the thing. 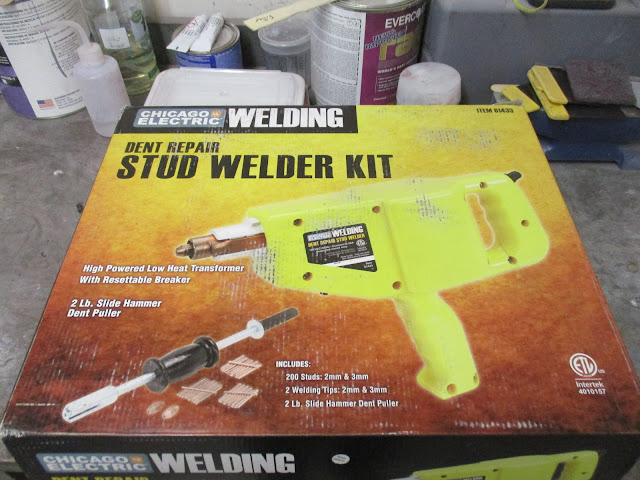 Of course, I relied on my trusty Harbor Freight to take care of me and I picked one up. Like I mention in the video, I think this is one of those tools where one company in China makes them for several different retailers and they all just get different labels and, of course, different prices. Unfortunately, you cannot use coupons with HF welders, so it was full price (~$98).

The video is a bit repetitive as I try to show you how it works from different angles (I struggle with showing dents in videos or stills). But, the basic idea is that this stud welder tack-welds on 2mm or 3mm (I used 2mm based on Dorothy's sheet metal thickness) studs. Then, using a slide hammer that grabs on to the stud, you pull the dent out. That's about it, really. Unlike the slide hammers that I used as a kid, and that the PO used on Dorothy, you don't drill holes into the sheet metal and use a sheet metal screw to attach to the slide hammer and yank. That means there are no holes to fill!

After getting the newly repaired driver's door into more build primer, it was time to have some fun.

The trick is to use enough studs, placed in the correct spot, to pull the dent(s) out. With the bonnet nose being such a mess, I used lots of studs and won't be shy about using more.


This is an iterative process, placing a few studs and pulling the dent out, then clipping them off and maybe putting another few studs down. I did have trouble on the rolled edge of the nose pulling the dent out. Two reasons for this, I think. First, the metal will be pretty hard (less ductile) here since it's been work hardened bending it over and, therefore, difficult to pull out. I'm thinking about using a punch to try and knock it out from behind, but maybe I'll just stick with filler...or a combination. We'll see.


The other issue I had was a general one. The pins are relatively soft. This is great when it comes to cutting them off and grinding them down, but the drawback is that you only get a few good pulls with the slide hammer before the knurled knob has stripped away the pin and it no longer holds on the pins. I changed my method a bit to compensate for this, but in the end, it is what it is. Again, the pins are soft on purpose, so it's a trade off. Also, I think the design of the slide hammer in how it attaches to the pin could be better (hard material, more clamping force...something), but it'll do.

All in all, however, I was very happy with how it came out. There's still work to do, of course, but it is way better than it was when I started. Again, since I struggle with dent pictures, it's hard to get an appreciation for the difference, but it's very noticable in person.

Again, there's still work to do here, but I'm hoping that I can use the slapping spoon and dolly to continue to flatten it all out, along with the shrinking disk. I think I can get about an 80-90% solution with that and filler will take me the rest of the way.

As I type this, I've stripped the outside of the bonnet to bare metal. I'm going to do some coarse metal work on the next visit and then get it in epoxy. Until next time...
Posted by Chris at 6:57 PM