So, my efforts yesterday and most of today were focused on centering the jet so that suction piston would fall with the "klunk" that it's supposed to. Kicked my butt for a while, until someone on the forum mentioned that I may have the wrong jet bearings. Of course, hindsight being 20/20, I had noticed a difference between the top of the old jet bushing (that you can see from the carb body) and the new one.  So, I went back and looked at SpitBits parts listing and they only had the set that I ordered and it was supposed to be for Spitfires from 1962 through 1969, so I thought I was good.
However, it turns out, that there were two types of HS SU carbs. Those with fixed needles (like I have) and though with biased (or moveable/floating) needles. Well, how about that!

First thing I did was went to the "SU website" and looked up jet bearing kits and came up with this where I found part numbers for HS Jet Bearing Kits for fixed and biased needles. The part number that I got from Spitbits was WZX 1442 (SpitBits uses the same part numbers as the manufacturers as far as I know and as much as possible...makes cross-referencing very nice). Well, that's for a bias needle (which, in essence, is spring loaded and will float. So, as I understand it, centering is not critical since it will tend to self-center). I needed WZX 1341 for the fixed needle. So, I put the old jet bearing back in (in actuality, they probably didn't need to be replaced, but jet bearings sounded important and they were not expensive, so I did it), centered the jet as explained here (with a good visual look here).

I looked at parts availability at SpitBits and Canley Classics (a UK parts house where I steal all the diagrams from) and they both only list the 1442 as available. Moss is hard to tell because they do not use original part numbers. However, their jet bearing kits are significantly different in price, which is consistent with the SU carb site that I talked about above (the fixed ones being cheaper).


Another aspect to be able to tell the difference between the two is the fixed ones come with a very thin brass washer that goes between the bearing and the carb body. The biased ones do not. If you look at Victoria British's listing, they seem to mix both and sell the washer separately...uh, not sure what's going on there or what you would get. So, at the end of the day, I think that there is confusion across the board on fixed and biased jet bearings except for the guys that really know what they are talking about...which seems to be those on the forum and the guys at The SU Carburettor Company.
I did get the carbs reinstalled into the car, got the linkage all connected and the fuel lines run. I even tried to start it, but no joy. I have good gas, so I'm focusing on an ignition problem (though I have spark...maybe my timing is too far off...and I have to get that vacuum gauge off of there!). 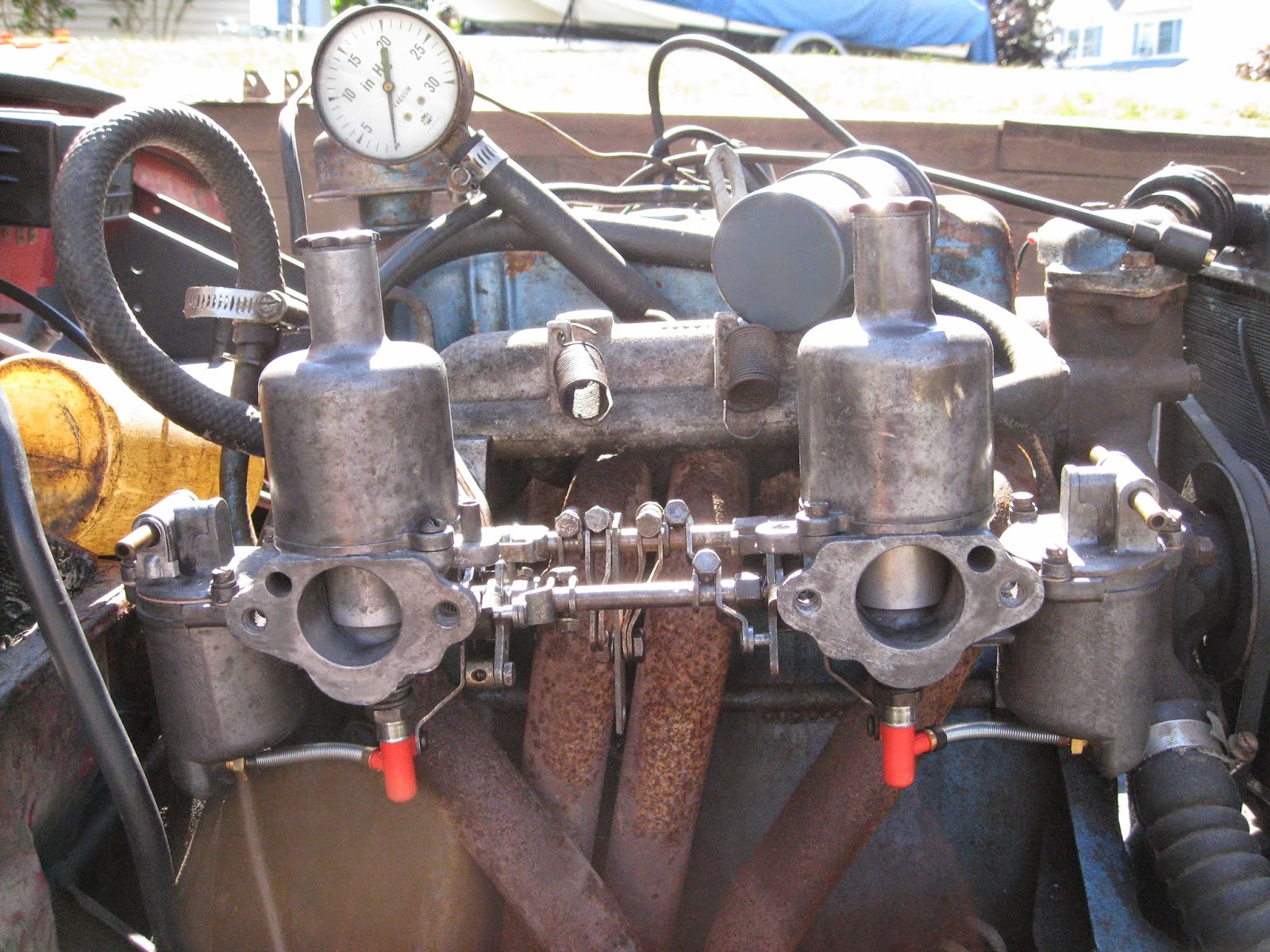 So, even though today (and yesterday) were full of frustration, I did learn a lot about how the SU carb works and the differences in the SU carbs themselves. I can't thank the guys in the Spitfire and GT6 forums at The Triumph Experience enough. They are putting up with my rookie questions with good grace. I've been trying to answer some of the softballs to pay it back, but only if I'm SURE that I know what I'm talking about...so I think it's only been one post.

And, I apologize for my "anal-ity" and that I keep changing the site template. Please put up with me until I get it the way I want it for maximum view pleasure :)!
Posted by Chris at 10:12 PM