Finished up putting the entire gearbox back together. It went smoothly as it was just brute assembly with no critical measurements. I did find two semi-stripped bolts (holes were good) and replaced them.

I also forgot about the bottom bolt in the clutch housing needs a copper washer. I found a brass one and hopefully that will be sufficient.

I was proud of myself and was even checking the proper torque on everything. I'll go back and cut away the extra gasket material and Permatex (I used Permatex Blue, by the way). Technically, I probably should have used a sealant, but there you go. The manual called for using grease on them all but the only one I did this for was the gearshift extension to the top cover as I didn't think I had too much of a chance for leakage from this union.

I also put a new release bearing and reinstalled the release lever. 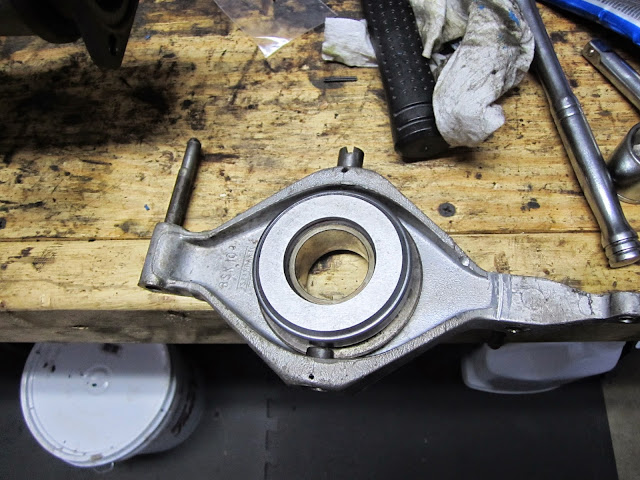 In hindsight, I should have gotten a new release level fulcrum pivot pins and bushings, but they weren't too bad for me to stop and wait for new parts.

Once this was done, I moved on to removing the radiator, water pump housing and associated hoses and hardware. The PO, when he installed the Mk1 motor, decided to stick with the Mk2 intake and exhaust manifolds. Since a Mk2's intake manifold has coolant piped to it and the Mk1 does not, this resulted in not having an extra splitter that is required to pipe coolant to the heater. The Mk1 heater return pipe has only one outlet while the Mk2 has two, allowing water to flow from the intake manifold to the heater AND back to the block.

All associated items came out without issue. However, the water pump seems to be in pretty sad shape and it looks like the only option is replacement, though they aren't that expensive. The radiator, however, was in pretty bad shape as well. I wasn't really expecting this. Looks like the cooling fins have just wasted away over the years. While I didn't find any evidence of a leak, I'm sure the lack of surface area impacts the cooling capability. I'll be on the lookout for a used on of those, I guess.


That was about it for the day. Oh, I also cleaned up and de-rusted the gearbox mounting brackets, but I have yet to paint and then install them. I spent pretty much all of my time in the garage today so it definitely wasn't family time except when the boys came over to take a look. So, we'll see what I can get away with tomorrow, but I'm not to hopeful of significant work.