A bit of work today. My morning was spent at Harkness State Park in Waterford, CT attending my second (the 29th) annual British by the Sea car show. Unfortunately, the weather was not as nice as last year and threatened rain all morning. This obviously kept some cars and vendors away, but there were a few die-hards there. My favorite was a very nice 1968 TR 250. I actually talked to the gentleman who owned and restored it (it took him a 20-year process).

He located an original, crated TR-5 motor (that's the one with mechanical fuel injection that was only sold in the UK; the TR-5 in the UK was the TR-250 over here, as best as I can figure) in the UK with a guy who didn't know what he had. He had it tuned and updated and eventually put in this car.


The TR-5 motor could not pass emissions regulations here in the states so it stayed over on that side of the pond while we got the carbureted version of the motor.

Lots of attention to detail on this one and out of a limited field, my favorite. Like I said, the field was very small due to the weather. I got there early, around 9:30 to try to avoid the rain and by 11:30, I had seen everything at least three times and had my lunch at the wood-fired pizza truck that was there (The Rolling Tomato; outstanding place that we eat out regularly at their brick-and-mortar place). 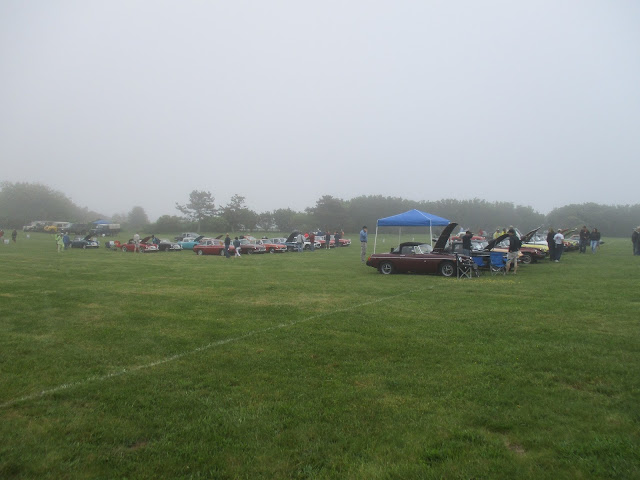 And, since I couldn't resist stealing from an old Chevrolet Impala add that I remember seeing in an Autoweek magazine as a kid:

After that, I headed over the garage to get some work done. Not much, as I didn't have my tools (I finished up moving later in the day, after I was done with my work). I did some more engine removal preparation like draining the oil...

I pulled the dynamo (generator), fuel pump and distributor as well. Though these are not required to pull the engine, they are going to get removed anyway. I didn't have the right size wrenches to pull the dynamo bracket.

I also broke away the rest of the exhaust/intake manifold bolts and tried to remove the exhaust manifold, but lack of a good cutting wheel prevented me.

I also removed the mounting brackets for rest of the exhaust system (I know I'm missing the bracket at the gearbox...probably another one or two along the line as well) and let it rest on the ground awaiting my sawzall to cut through the pipe.

Once I get the manifold separated from the rest of the exhaust pipe, it (the manifold) will come out for eventual refurbishment.

So, not too bad, but not enough. Again, the clock is ticking and I only have 12 months to get this car on the road. That 12 months will entail and engine inspection/rebuild, head rebuild/conversion to unleaded, frame strip/repair/rebuild/refurbishment, suspension rebuild, body repair and putting it all back together. Lots of work...so little time.
Posted by Chris at 8:38 PM