I've been slowly putting the steering rack back together over the last few days. A snow day for the kids and I (wife was out of town) today. As usual, the local school districts do a knee jerk and call school off rather than delaying it 2 hours. Most of the snow was melted by the end of that time. Back in my day! Anyway, this is a rather lengthy post so fair warning.

NOTE: If you decide to do this, I cannot stress enough to keep your parts separated by group (e.g., driver's side inner tie rod), bagged and labeled. There are items that are easily lost and several stacks of shims that make up required measurements, all of which I'm sure are not easily replaced.

Previously, I had gotten as much of the old grease and grime and rust and everything else that wasn't supposed to be there cleaned out. I soaked some of the rusty bits in vinegar overnight and wire brushed them. I took a wire wheel to everything (both using a drill and a Dremel Rotary Tool) and also some 220-grit sandpaper to some of the bearings, collars and washers to remove the surface corrosion that made taking the thing apart a bit of a chore. I also pushed a clean rag through the rack tube a few times using a wooden dowel that cleaned everything right up. A coat of Rustoleum Gloss Black was applied to the stuff that would take a painting.

There is a brass bushing in the end of the steering rack tube, opposite the pinion housing. It's a combination of designs of the brass thrust washers and gear bushings I found in the transmission and I thought it was interesting to find it here.

You can clearly see the dimples and just barely see the dark groove towards the bottom center-left. This groove is spiral cut and runs the entire circumference of the bushing from bottom to top in this orientation. These types of bushings existed before technology came up with sintered, or oil-impregnated, bushings. The dimples hold the oil/grease when things are static so it is ready to provide lubrication when things start moving. The spiral promotes movement of the oil/grease up and down the bushing as, in this case, the steering rack moves along it. A thank-you to my brother for educating me.

Assembly was also a good excuse to take a trip to Harbor Freight to get some more stuff which I'll talk about as I go. As with my previous post, I'm including some exploded views of the whole process from the workshop manual and including these part numbers in parentheses after the part name, as applicable. Everything I'm doing follows the Workshop Manual unless stated otherwise. However, there are several measurement points with various specifications that I do not go into. Please, if you decide to tackle this, ensure you have a good reference. Besides brakes, this is probably the next most important safety-related item you've got.
Now, on to the show.

First portion of assembly was getting the pinion assembly end float measured and set. This required putting it together inside the pinion housing without any shims (12). 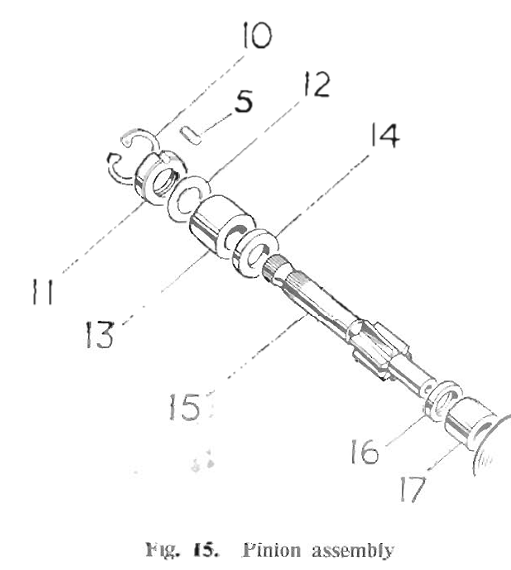 The rubber o-ring in the upper left of my photo is not identified in the manual figure. It fits inside the recess in the retaining ring (11). I was able to source a pair of these from my local True Value for about $1.50. I couldn't see a difference by comparison by eye between the new and old.

To measure the end float, I purchased a Clamping Dial Indicator from Harbor Freight. Not the highest quality of stuff, but I bet it's as good as they had in the 60's. It did the trick.

The end float came out to be about 0.040" which, funny enough, was just about the exact thickness of the shims (12) that I pulled out. How do I know this? Well, I measured the shims with my other new toy, the Harbor Freight 6 in. Digital Caliper with SAE and Metric Fractional Readings. I had a coupon for this so it was like $11. A bit flimsy, but it works.

Once complete, this was all loaded back in the pinion housing, including shims this time, new o-ring and the dowel peg (5) which the manual tells you to be careful not to lose. Yeah, thanks....almost did about 9 times.

Next was assembly of the pinion pressure pad. This also required some measurements and shims (29) and, as expected, it all went back together just as it came apart with good measurements. 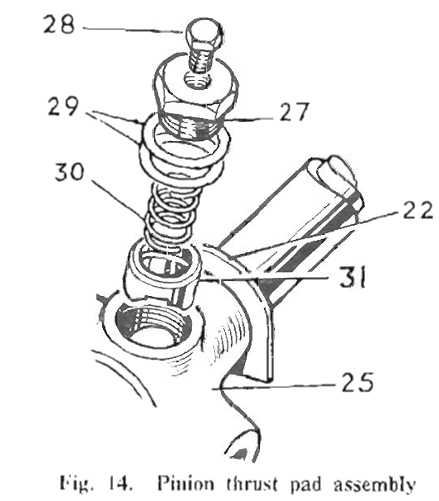 After this is all assembled, there is a test for measuring resistance that entailed suspending a 2-pound weight 7.9" from the pinion. I couldn't come up with a slick way to do this, so I didn't. Hopefully this will not impact me in the future.

Next was putting the tie-rod inner ball joints (38) on. I followed the manual for measurements and assembly instructions and used the shims that were already there. I used new lock tabs (35) to make it all good. 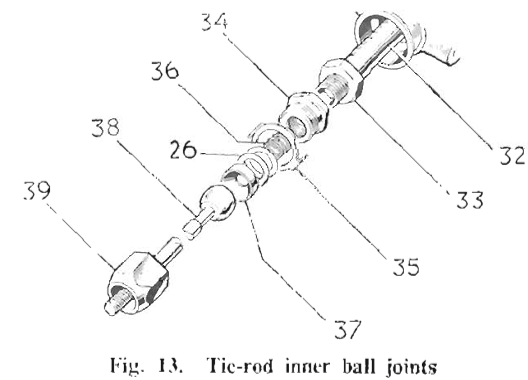 The lock nuts (33) are then put on either end of the steering rack and are spaced 24.4" from the inner side of each nut. This was a tricky measurement because you are dealing with a relatively long distance over an uneven surface. I eventually got it right. The manual doesn't really mention whether you should expect to bottom out the inner tie-rods into the steering rack, but only says to screw them in until they meet the lock nuts. Once I got the measurement correct, the tie-rod ends met the lock nuts before they bottomed out, so I assume this is the correct way to do it. Definitely something that you have to experience trying yourself to understand clearly. Once this was assembled, I tightened the lock nuts (33) into the inner tie-rods(38).

Once done there, the next step was to put on the big rubber bellows or boots. Of course, I tore one as they are not that easy to deal with. I can't imagine how much money my impatience has cost me when I know better. Anyway, I kept going to try and learn more lessons but I have a set on the way from SpitBits.

The manual tells you to grease and put the boots on and secure them with the clips. You can grease them, but I wouldn't secure them yet. There are additional measurements you need to take to get the outer tie-rods sets right and the boot gets in the way since it covers the inner tie-rod lock nut, which is what one of the measurements is based on.

I ordered new outer tie-rods from The Roadster Factory as part of their front suspension major rebuild kit a while ago. While they are nice, the threads were very dirty on the inside with machining residue. I figured this out when I tried to thread it up the inner tie-rod and it starting galling. Fortunately, I didn't strip any threads and used a brass round brush and some de-greaser to flush it out and clean it up.

Another measurement to take is the center of the outer tie rod (where the grease fitting is) to the inner portion of the inner tie-rod lock nut. This should be 10.13". This was a painful because of the rubber boot being in the way and what-not. On the second side, which I hadn't put the boot on yet, I screwed in the outer tie rod and got it measured up properly, then marked the threads with red Sharpie. Luckily, assembly of the boot, the lock not and tie rod did not remove the Sharpie totally and I was able to get very close to that 10.13".

That was about it. I'm sure there will be several and probably frustrating measurements and adjustments to make once I get this on the car. But, at the rate I'm going, that will be so far in the future that I won't remember any of this anyway! Of course, I have to take one side back apart to get the new boot on, so there's always that.

Oh, and one other Harbor Freight toy was an extension cord on a reel so I don't have to drag cords across the garage. There aren't a whole lot of outlets in there and this will help with my garage re-arrangement. I also got a halogen light to go along with it because the new corner that I'm working in can get kinda shadow-y. Oh, and a welding table, (on sale) but that's for another post! 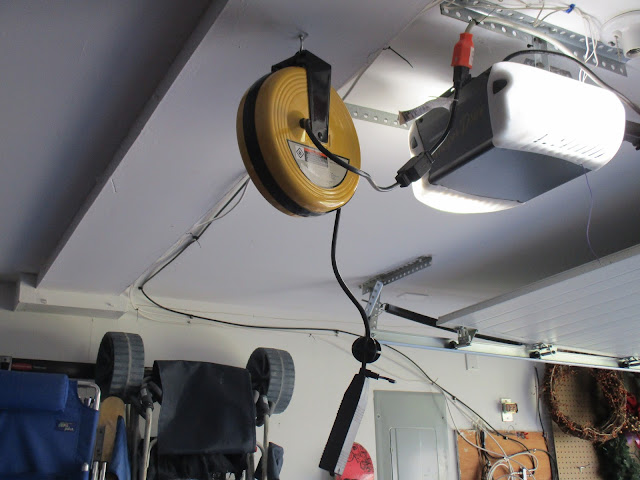